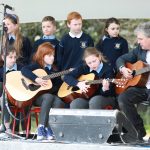 We are the lead school in the Creative Clusters Initiative for the school years 2021/2023. Ms. Mulrooney is the Lead School Co-Ordinator for our project. Our Cluster schools are Berrings NS and St. Catherine’s NS Bishopstown. Creative Clusters is an initiative of the Department of Education, led by, and in partnership with our education support centres and funded by the school excellence fund. Creative clusters is a plan to develop the creative potential of every child. It’s a fantastic opportunity to work collaboratively with other schools to expand on some ideas and methodologies and to inspire pupils and staff members within our schools. We were extremely grateful and honoured when our application was chosen as only one application was accepted from each Education Centre nationally.

When we decided on our proposed plan, we contacted John Spillane and we were delighted when he embraced our project idea. A lot of preparatory work went on in each school prior to John’s first visit and we were delighted to be able to incorporate aspects of the new Primary Language Curriculum such as writing workshops, critical thinking and  the integration of Gaeilge and music. The minds of our children were inspired and enthused ever before they put a pen to paper. With some invaluable input from John, the children learned about songwriting techniques such as alliteration, assonance, rhyme and rhythm and call and respond. Inspired by local tales, traditions and place names the children were actively engaged in the writing process. As teachers we were in awe of their enthusiasm for this project and how proud they must feel to know that they have actually written their own songs! 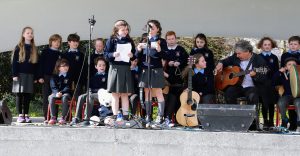 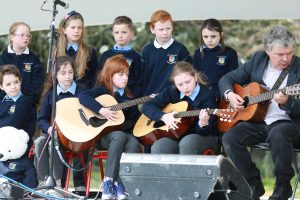 The children in 3rd Class wrote 3 songs. The first song is called ‘The Moon Shines over Monkstown’   Their picturesque locality is brought to life in this song through the light of the moon casting it’s shadow over the harbour and Monkstown Castle. The children worked collaboratively on this song through a series of writing workshops. 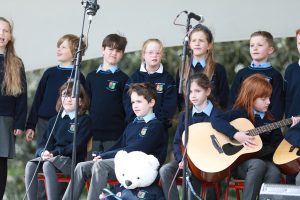 The second song is about Fr. Con Cronin (RIP) who died last year. Fr. Con was a ‘larger than life’ character who was much loved by all the staff and children in Scoil Barra Naofa. Fr. Con adored music and singing. He could spontaneously burst into song and light up a room. The children remember our great friend Fr. Con who always had a smile on his face and kindness in his heart.

Amhrán Scoil Barra Naofa, is a school anthem written as  Gaeilge. The children drew inspiration for their songs from local stories, heritage and place names. They brainstormed ideas and worked on many writing techniques  throughout the process. The children’s voice was a priority throughout the project and the emphasis was on fun and enjoying music making and performing. 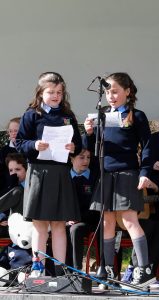 Once the songs had been composed the teachers decided that it would be nice idea to give the children an opportunity to perform their songs for one another thus contributing to the collaborative element of this project. We were delighted to get permission from Cork City Council to showcase these songs on their stage in Fitzgerald Park, on Wednesday morning April 6th 2022. The children in each school performed their songs on stage and we were thrilled to have John accompany us for this performance. All the pupils involved thoroughly enjoyed and benefitted from performing and learning about other places within their own county through the medium of music. The icing on the cake was when our concert was featured on three issues of The Echo newspaper during the month of April 2022. Many thanks to Mr. O Connell, Ms. O’Brien, our wonderful SNAs and everyone from the school community who has helped out throughout the year.

We would like to acknowledge the children’s efforts and celebrate their talents in music, performing and songwriting. We recognize these young children as historians, performers, singers, musicians and songwriters. We are immensely proud of them and perhaps this is just the beginning of their musical careers! 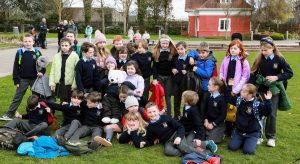 View all posts by Deputy Principal →